2008-present
Wakfu is a French animated television series produced by Ankama Animation, based on the video game Wakfu. The first season of 26 episodes began airing on 30 October 2008, and new episodes would continue to air into January 2010 on France 3. The show is animated with Adobe Flash software; all the production is done in France except the special episodes "Noximilien l'Horloger" and "Ogrest, la Légende", both produced in Japan. The series is directed by Anthony "Tot" Roux, and character design is directed by Xavier "Xa" Houssin and Kim "Tcho" Etinoff.

There had been several attempts to dub the series into English, with several pilot dubs being produced. In 2009, the first two episodes were shown for the very first time in English at the London MCM Expo,[1] this dub features a cast of Paris-based voice actors. In 2011, a dubbed version of episode 9 was shown at Anime Expo, this dub is believed to have been recorded at Ocean Productions in Vancouver Canada.[2] In addition of the Vancouver talent pool, this dub also features voice actors from Calgary; on Chinook Animation's website their portfolio lists working on 5 Wakfu episodes,[3] two voice actors from Calgary, Lucas Gilbertson and Doug de Nance, have even confirmed their involvement in the series.[4]

Dubbed versions of episodes 8 and 28 were originally available to watch on Planet Nemo Animation's website back in late 2013, this was an attempt to shop the series around in the hopes of an American network picking it up. Not much is known about this dub as these episodes have long since been removed.[5]

In early 2014, Ankama launched a Kickstarter campaign to fund an official English dub for the series, the campaign reached $483,524 out of an $80,000 goal.[6] The dub was recorded in the UK at Flix Facilities, Ltd. The dub cast mostly consists of British voice actors as well as a few North American expats. This dub covered nearly everything in the series, including the Specials, OVAs, Shorts and even the spin-off series Dofus: Kerub's Bazaar. In mid-2014 Netflix bought the distribution rights to the series, they released the first season on their servers in September of that year which marked the official debut of the dub. Netflix would also go on to co-produce the series' third season. The dub would also air on Toonami in Southeast Asia and on Cartoon Network in Australia.

Netflix covered the dub to Season 3 themselves, which was released on their servers in 2018. This dub switches to an entirely new voice cast based in Los Angeles. This dub strongly differs from the previous one, having several differences with how certain names or words are pronounced and many vocal performances sounding radically different than the previous cast. 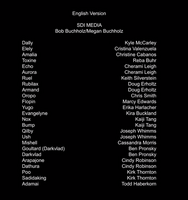