2020
Veneno is an acclaimed Spanish biopic drama web television series created and directed by Javier Calvo and Javier Ambrossi. It is made as a single season of eight chapters which aired on Atresplayer Premium platform (Atresmedia) from 29 March to 25 October 2020. It is a biopic based on the book "¡Digo! Ni puta, ni santa. Las memorias de La Veneno" (2016) written by the journalist Valeria Vegas.

Due to the success of the series on Atresmedia, Veneno premiered internationally on HBO Max starting on November 19, 2020, and it was announced that it was also included in its Latin American catalog, starting July 2, 2021.

The series focuses on the life and death of the Spanish transgender showgirl, LGBT icon, singer and television personality Cristina Ortiz Rodríguez, better known by her nickname "La Veneno". This story tells the experiences of a struggling transgender woman, who achieved fame with television appearances in the 90s and conquered the audience with a unique vision of the world. The series also talks about the importance and relevance of mass media, how it can popularize or marginalize someone in just one second. 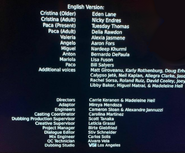