1995-1996
Neon Genesis Evangelion (新世紀エヴァンゲリオン Shin Seiki Evangerion) is a Japanese animated television series produced by Gainax and Tatsunoko Production, and directed by Hideaki Anno. It was broadcast on TV Tokyo from October 4, 1995 to March 27, 1996 and consists of 26 episodes.

It has gained international renown and won several animation awards, influencing an artistic and technical revival of the anime industry.

The series was first dubbed by ADV Films using their Houston-based recording talent, and released straight to VHS from 1996 to 1998. Commentary for the English dub will often make reference to it being made on a tight budget, involved renting out space to do recordings with substandard equipment, and a good portion of the cast was played by members of the production team. Tristan MacAvery even claims the dub was transcribed from fan translations. Nonetheless, Evangelion became one of ADV's most popular titles, and one of their higher regarded dubs.

With the remastered release of the "Renewal of Evangelion" DVD sets in Japan, and the Director's Cut of Episodes 21-24, this required ADV to go back and do vocal additions/remastering to their dub. Unfortunately not all the cast from before were available, so some changes were made to the cast (Gendō's original voice actor, Tristan MacAvery, had moved from Texas to New York in the interim) though most of the voice cast was left intact. A positive was that ADV had since acquired a larger talent pool, so it allowed some of the poorer performances to be polished. The Rebuild of Evangelion film series was dubbed by Funimation, only including three voice actors from the ADV dub for Asuka, Shinji and Misato - while retaining Jon Swasey as Gendo from the Director's Cuts, and changing the rest of the cast.

Netflix later acquired the streaming rights to both the series and the films on November 26, 2018 and released them on June 21, 2019. This release featured a new dub recorded in Los Angeles by VSI with none of the original cast returning (though both Spike Spencer and Amanda Winn Lee said that they were allowed to audition).

It is publicly unknown how much involvement and oversight Gainax/Khara had on each dub and sub, but the director for the Netflix dub stated they made the new casting choices. Additionally, there is several evidence indicating they have much stricter control on new English localizations after the first dub of the Evangelion 3.0 film.

This has led to the Netflix release, translated by Khara themselves, containing several changes relative to the older ADV ones, which made it much more accurate to the original Japanese, fixing dozens of mistakes thanks to much closer oversight.[1] The dub has however received mixed reception, with many deriding the dub for the perceived overly literal scripting choices, most notably referring to Shinji as the "Third Children" rather than the proper grammatical "Third Child" - a decision reflecting Khara's standardization with their marketing. On the flipside, the dub has been praised, with some finding it more natural than the old dub in addition to being more faithful. The new cast, chosen by Khara themselves, is also more faithful to the original Japanese cast.

On the 25th anniversary of Evangelion, October 3, 2020, GKIDS has announced they are releasing a Blu-Ray set of the Evangelion series and films in November 2021. This release includes both the ADV and VSI dubs of the series.[2] 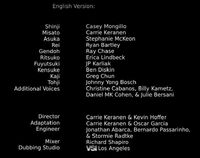 *From February 24-26, as part of Toonami's Giant Robot Week