2021-present
Go, Dog. Go! is a Canadian-American computer animated streaming television series based on the 1961 children's book of the same name by Philip Dey Eastman. It is created by Adam Peltzman, and a joint collaboration between DreamWorks Animation Television and WildBrain Studios. The series was released on January 26, 2021, on Netflix.

Like various other preschool shows that are hosted on the service, this series was redubbed into British English on Netflix. 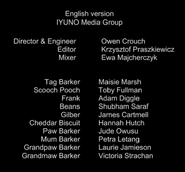