The story is set in India in a dystopian future where fascism is at its top, and the story's main plot is the interrogation of a dreaded terrorist Ali Saeed in a secret government internment camp that ignites a series of horrifying and supernatural events in the aftermath. Radhika Apte plays the main character Nida Rahim supported by Manav Kaul, Ratnabali Bhattacharjee, S. M. Zaheer, Mahesh Balraj, Rohit Pathak and Mallhar Goenka in prominent roles.

The miniseries was conceived based on a dream Graham had seen. Originally meant to be the first of 3 films in a deal between three production houses, Netflix acquired the production in February 2018 after Graham felt that a longer format would be better and had it turned into a miniseries. Ghoul released to positive reviews from critics, with praise to the performances and storyline. 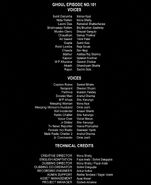