Dubbing Wikia
Register
Don't have an account?
Sign In
Advertisement
in: Anime Films, American Dubbing, Dubs from the 2010's,
and 3 more

Gantz:O is a 2016 CGI anime film directed by Yasushi Kawamura, produced by Digital Frontier, written by Tsutomu Kuroiwa and based on the homonymous manga created by Hiroya Oku. It was released on October 14, 2016 in Japan.

The film had its English-language premiere at the 2016 Tokyo International Film Festival. This screening of the movie featured an English dub, recorded locally with talent in Japan. For its western release, Netflix commissioned a new version produced by SDI Media in Los Angeles. Upon its debut, the audio contained two holdover performances from the original Japanese-produced dub, despite American actors having recorded those roles and being listed in the credits. The issue was later corrected. 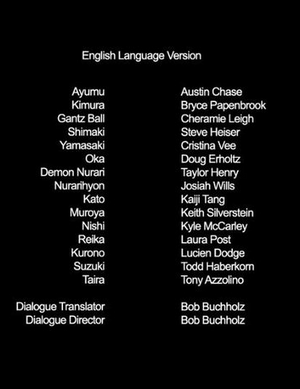