Dubbing Wikia
Register
Don't have an account?
Sign In
Advertisement
in: British Dubbing, Animated Series from the 2010's, Dubs from the 2020's,
and 3 more

The English dub of the series was produced by Jungle Studios in London, England. It was voice directed by Allan Johnston, and Graeme Elston did the voice recording.

It is slated to premiere sometime in the United States, though an air date has not been announced. 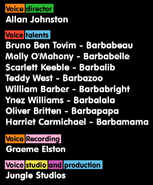