Dubbing Wikia
Register
Don't have an account?
Sign In
Advertisement
in: American Dubbing, Dubs from the 2010's, Italian Series,
and 5 more

2015-2017
Alex & Co. is an Italian television series which first aired on Disney Channel Italy on May 11, 2015. It was created by Marina Efron Versiglia and stars Leonardo Cecchi, Eleonora Gaggero, Beatrice Vendramin, Saul Nanni, and Federico Russo and English actress, Olivia-Mai Barrett in the season special episodes.

The first season premiered in Italy on May 11, 2015, and ended on May 27, while the second season debuted on September 27 2015 and ended on November 29. On January 30, 2016, Disney Channel confirmed that the series was renewed for a third season, which aired from September 24, 2016 to February 18, 2017. The series ended with a set of special episodes from June 26, 2017. An English-dubbed version of the series aired in the United Kingdom, Ireland, Middle Eastern regions and South Africa. 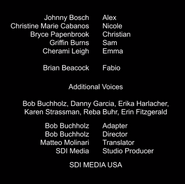