Dubbing Wikia
Register
Don't have an account?
Sign In
Advertisement
in: TV Series, American Dubbing, Dubs from the 2010's,
and 3 more
English

2018
1983 is a Polish Netflix original series created and written by Joshua Long, based on an original idea by Long and Maciej Musiał, set in an alternate timeline in which the fall of Polish communism never happened, and the Iron Curtain is still in place. It is Netflix's first Polish original series; eight episodes were produced by Netflix, and were released on November 30, 2018. 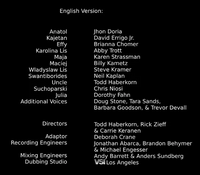